Marine Football Club in Crosby a place we hadn’t played before. Last year we performed at a house party for a sweet couple, we now call The Durdeys. It was Tony’s birthday and we were booked by his lovely wife Joanne. It was in a heated Marquee in the back garden on a cold evening, we knocked on the wrong house and wondered why they weren’t up for a party, oops. That is a whole blog in its own entirety though and if you sieve back through the blogs you will find it there somewhere. The relevance is we were asked to return to perform, only this time it was for Joanne and the party was organised by her husband Tony. 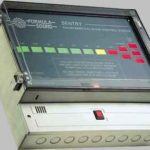 Joanne decided to have her event at the Marine Football Club in Crosby and it was a new venue to us. When we arrived the room had been extensively decorated with balloons, white chair covers, flowers and party paraphernalia it looked really good. The venue itself was fairly long and the stage was also quite large. Volume wise we would need to be turned up quite loud.  Not quite as loud as Marty Mcfly in Back to the Future but we did need to reach the back of the room. No problem we have our trusty QSC’s and they can create a party in a castle.

As we started to bring the gear in we spotted it. Nooooooooooooooo the venue had a sound limiter. A little sneaky box on the wall similar to that of a traffic light. A great invention to thwart noise complaints from nearby residents. For the Rag Tag Misfits and musicians across the world this was a sworn enemy of the virgin musician. Sound limiters you see are usually set at pretty low levels and if your volume is above this level, then the electric to the stage is cut dead.  It meant that we would have to watch and monitor the lights on the sound limiter throughout the performance. Certain bass notes cut through and it’s a tricky situation. You have make sure you don’t go into the red and what the little box considers to be too loud. 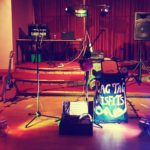 Wooden dance floors can set them off too. At one wedding we performed using the pop up acoustic and they had a sound limiter. It really wasn’t loud but half way through a song all the electricity cut and the music went dead. What actually set it off was the audience stomping on the dance floor, so you can imagine how tricky and restricting sound limiters can be.

After we had set up on the big stage we spoke to Joanne about the order of the night and start times. We congratulated for her birthday and the room began to fill up with guests. The resident DJ turned up and set himself up on the stage just behind us. The DJ began playing the music and introduced us as we took to the stage. Once we were on stage we set the night off with some live music trying our best to reach the back of the room. With some minor adjustments we managed to get a decent sound and managed to stay within the amber zone.

As we finished off the first set all was going well and a good time was had by all. It was now time for the lovely buffet and it really was a lovely Buffett. More like a meal than just regular snacks. We see some buffets in our line of work and have become buffet experts. Throughout the summer our diet mostly consists of buffet and finger food. Joanne and Tony put on a beautiful spread and their guests seemed to be impressed.

The highlight of the speeches was the one from their son. He was pretty impressive and had the guests in stitches. He brought tears to eyes and summed Joanne up perfectly. With a rapturous applause for their son we began to play. We learnt a song for Joanne as she requested it a few months before. Blurred Lines was one of her favourite songs so we learnt a rendition of it just for her. Minus the naked ladies it went down pretty well.

We were informed by the manager earlier in the evening, the live music MUST be finished by 10.30pm. The words were stern and the consequences harsh. Joanne had a word with them and negotiated an extra 15 or 20 minutes past our deadline. We were told if we go any more over the electric will be cut off. Fair enough we will just have to try and make the second set count so a good time was had by all. 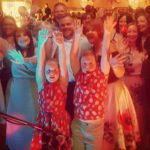 Overall it was a great evening and The Durdey’s friends and family are a lovely bunch. The DJ finished the evening off and although music was playing it was far too quiet. The sound limiter was in the green by this point quite low down. It really was restricted and just wasn’t rocking enough. We later found out he couldn’t go any louder because of the limiter. In a way it was a bit of an anti climax as we finished the live music set off with a bang, the rest of the night was mooted by the lack of thrust and volume in the recorded music.

Thank you so much again Joanne and Tony for asking us to celebrate another milestone birthday with you both. It was fantastic to see you both again. Thank you also to your friends and family. All the best to you and your family for the future and make sure your son follows his natural flare with an audience. I think you’ve got a natural comedian on your hands there. Peter Kay watch your back.