Crosshouse Inn, Formby was our destination for this evening. A surprise birthday party was on the cards. The birthday boy was Dave and we had been in cahoots with his wife Pam for many months about live music for the event. With stealth phone calls and emails the time had come for the big surprise. We visited the pub a few days before and met the landlady. Pam informed us that there was a discrepancy on our performance space. Informally chatting about the best place for us to play and the logistics of the night. Initially the landlady suggested we should perform in the main part of the pub. She informed us the acoustics weren’t too good in the back room. The private party was to be held in the back room and the suggested performance space seemed a million miles away from where the party would be.

Working out that the place in the main part of the pub would probably benefit them more and no so much the private party we decided to opt for the back room. We would simply alter our mixing desk to suit the room size. The landlady was really accommodating and helped us decide where tables etc., could go. There wasn’t too much room but it was plenty for us. We have performed in the corner of a living room before now. We are what you could call a compact band with a big sound. As it turned out this was a good idea as the party congregated mainly in the back room and also outside. 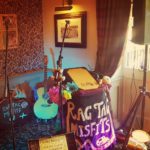 The big arrival of Dave was anticipated. There was a big curtain separating the back room from the main part of the pub and we all waited quietly. Trying to keep people quiet with drinks flowing is a task in itself. You get the “gigglers” and the “shussers”. With whispers of “is he nearly here?” “He’s coming, he’s coming everyone be quiet”. Its quite amusing to watch. Then back went the curtain “SURPRISE”. Cue the song “Surprise, Surprise” by the legendary Cilla Black. The reaction was brilliant. Dave looked like a rabbit in the headlights.

You never know how a surprise like that is going to go. Most of the surprise parties we do, the person booking it says “oh they hate surprises but I’m sure they will be fine”. This makes me chuckle and I’m hoping that we never experience someone fainting with an overwhelming reaction.

We played some recorded music as Dave got over the shock. It was a warm summer evening and the guests could still hear the music as they caught the last of the sunshine. We played to a backdrop of Dave’s classic moments throughout his life. 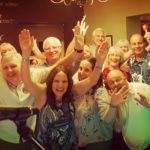 As we broke into our first set people started to sing along. We were trying to get everyone involved as it was a mixed crowd. Older people are usually more into live music and let loose. I think it may be due to instant downloads and music on demand for younger people. They sometimes seem embarrassed with live music. We eventually managed to get the “too cool for school” teenagers into the swing of things. If you mix a few modern ones in they usually warm to you.

During the break we put on some party classics that Dave & Pam requested. There was plenty of music for the break that we wanted to get through and as the evening went on the drinks were flowing nicely, perhaps too flowing as a lady spilt red wine all over her white pants. Everyone was shouting “white wine, we need white wine so it won’t stain” A lovely Buffett was served and the Cross House Inn did a fantastic job of the food.

I went outside for a breath of fresh air and I was talking to a little girl. She must have only been about 8 years old. I recently had rainbow colours put in my hair and she asked me “why does your hair look like a rainbow?” I told her that I like colours and everyone loves rainbows. She bluntly replied “I don’t” and walked off. Ha ha that was me told. 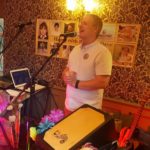 Just before the last set Pam managed to gather everyone in for Dave’s speech, he came across very natural and gave a good speech. He thanked everyone for coming and gave a special thanks to Pam who organised the party on his behalf. He thanked us and asked his guests to give us a round of applause. We did our best bow’s and curtsies and felt as proud as punch.

As we started our last set our aim was to keep everyone inside and we managed to do so. We got them up on the make shift dancefloor and they danced the night away.

As we were packing up, Pam, Dave and a group of friends continued to party. They were sat having a few drinks and I could hear one lady who sounded like she’d had a few vinos telling a story of a hamster she once bought. She informed everyone in a voice of dismay “I bought the hamster for £4 which I thought was bargain, then I had to buy a huge cage. Then I had to buy the feeder, toys, food and all the bedding. It cost me a fortune and then 2 weeks later the bloody thing died”.

This cracked me up and I started laughing quite loud. I obviously wasn’t laughing about the hamster dying as I love animals. It was the expression of the lady. Because she initially bought the hamster thinking it would be a budget friendly option and she was now left with an empty cage and an assortment of accessories. 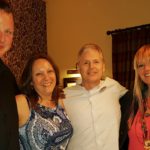 The hamster talk continued and Dave told me about a story he heard on the radio. Apparently a hamster escaped. The owner later found the hamster and put it back in its cage. Following the retrieval of the hamster the owner noticed the hamsters face stuck to side of the cage. He couldn’t work it out. To cut a long story short, he took the hamster to the vets (cage included).

It turned out that when the hamster had escaped it decided to put a fridge magnet in its mouth and store it in its cheek. When the hamster returned to the metal cage, obviously the magnet stuck through the cheeks of the hamster pinning it to the side of the cage. I’m happy to report that the hamster had the magnet removed and lived a long (although I’m sure traumatised) life spinning on its wheel. With a vow never to visit the fridge again.

We packed up the van giggling about the hamster stories and said our goodbyes. Thank you so much for booking us Pam, thank you to all your friends and family and huge congratulations to Dave on your birthday. Also we’ll raise a glass to the hamster who lived to tell the tale and to the poor one who didn’t.