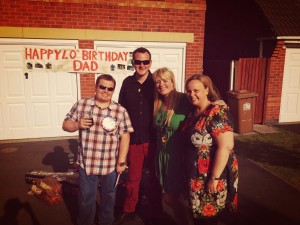 Today we had the task in hand of a surprise party that Nicola had arranged for her husband Neil. This was no standard house concert it was a fully blown street party and all the neighbours were involved. Neil had been sent to the pub whilst Nicola and her troop of helpers had arranged for a marquee, a barbeque, decorations galore and live music and party entertainment out in the street. It felt a bit like a celebration during the Coronation and it was fantastic to see such community spirit. When Neil arrived home he was blown away (and very surprised) by the efforts of his lovely wife and was thrilled with the whole street party theme.

The sun was shining and the birthday party was a huge success with their guests singing and dancing to the live music. What a lovely crowd of people and a fantastic day. Nicola was so happy with the performance that she rebooked us for her own 40th party later in the year. Thank you Nicola and Neil for looking after us and being such wonderful hosts; until next time…